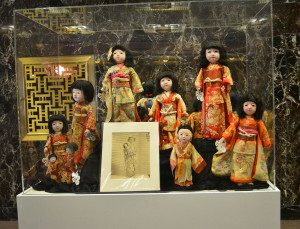 Japanese dolls from the childhood collection of Shirley Temple

To summarize Theriault’s Love, Shirley Temple event, all I can say is that it was fun, exciting, exhausting, and very different from any other doll auction I had ever been to. There was a tremendous outpouring of love and nostalgia for Shirley, and a great desire by many collectors to own a doll, costume piece of artwork….something…anything…that Shirley owned. Hence, prices for the entire auction were very strong, usually many times over the pre-auction estimate.

Besides the movie costumes, the most popular items seemed to be any doll or toy that was accompanied by a photograph of Shirley holding said doll or toy. And people were willing to pay a big premium to own one of these items. I swear I saw an Armand Marseille 390 sell for over $4,000–but it came with a fabulous picture of Shirley Temple holding the very same doll. 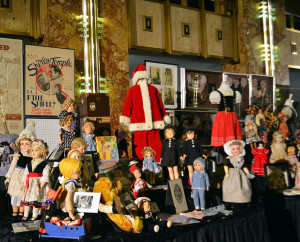 More dolls and ephemera from the Shirley Temple Theriault’s Auction

Shirley’s film costumes, or sometimes wearing outfits from countries that gifted the dolls to Shirley.  These items were all, in effect, one-of-a-kind Shirley Temple dolls.  Other popular items included artwork by Shirley, letters written to Shirley or autographs given to her, and other Shirley movie ephemera from the era.

By the way, at the auction I won a small Japanese doll gifted to Shirley by a group of visiting Japanese school girls, accompanied by a photo of Shirley, the girls, and the doll. This item had special meaning for me because of all the wonderful ties my family has with Japan, especially the lovely Japanese exchange students that have stayed at our home over the years. I have a picture accompanying this article showing some of the other beautiful  Japanese dolls Shirley had in her personal childhood collection. Later this week, I’ll post the item that I won along with the picture.

I had hoped to post this last night, but the auction went till after 11 a.m. (I watched the last two hours in my room on my laptop half asleep) and then I went directly into Theriault’s antique dolls auction this morning. Plus, there was the start of UFDC activities. This will be my last post until sometime tomorrow when I find time to write in between convention events. Right now I’m off to the UFDC Ice Cream Social!