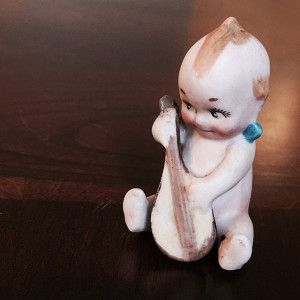 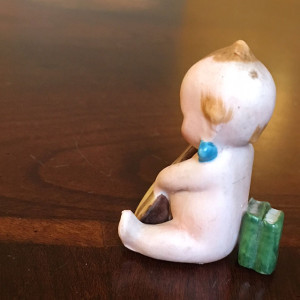 Back of Action Kewpie With Mandolin,, Showing Books he Leans On

If you are not familiar with them, Kewpie dolls were created in 1912 by illustrator Rose O’Neill (sculpted by Joseph Kallus and distributed in the United States by Borgfeldt) based on illustrations of Kewpies first published in the Ladies’ Home Journal in 1909.  The bisque dolls were made in Germany from 1912 until World War 1 stopped imports to the United States, then they were made in composition.  Some knock-off Kewpies were made in Japan as well, and throughout the 20th Century many plastic and reproduction Kewpies were also made. Kewpie dolls are extremely popular and come in infinite varieties which creates some of the interest in collecting them. The bisque Kewpies made in Germany are the most popular with doll collectors.

One fun thing to note: when I started collecting dolls, Kewpie dolls were Vintage Dolls; not yet quite antique since they were not yet 100 years old. Now, many of the bisque Kewpies made in Germany are legitimate antiques, since so many were produced from 1912 to 1915.  Of course, I’m not sure if that says more about Kewpie dolls or about how old I am.