Fashion Queen Barbie: Lifestyles of the Rich and Famous 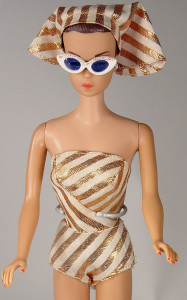 This doll is hard to find never removed from her original box, and is valued at approximately $500 to $700 in that condition. Without the box, but mint in her original bathing suit and turban, the doll is valued at approximately $200. As usual with Vintage Barbie dolls, less for played with dolls, and more for high-color dolls. Also, more for dolls with all three mint wigs. When purchasing, watch for melt marks in the molded hair caused by wigs staying on the dolls too long.

The doll did not come with the white Vintage Barbie glasses with glitter–I added those, because Fashion Queen Barbie doll, to me, always looks ready to lounge by her pool. Definitely a mid-60s doll ready to live the good life!