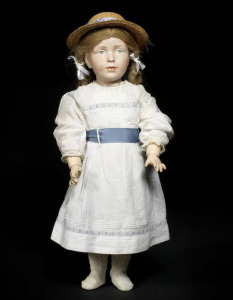 This year has been an exciting year for antique doll collectors, with the first dolls ever to break the $300,000 price barrier at auctions.

The new world record-setting doll was sold at Bonham”s on September 24 for £242,500, which is approximately $394,000. The doll is a German character doll by Kammer & Reinhardt.  It has  an unknown mold number which has been speculated to be an experimental mold.

Until the sale of this doll, the world record for highest price for a doll sold at auction was held by Theriault’s for the sale of a French character doll by Albert Marque which sold in March of this year.  That doll was from the Puppenmuseum Stein am Rhein, a doll museum in Switzerland, and was #27 of the 100 examples of that doll known to have been made.  That doll sold for $300,000.