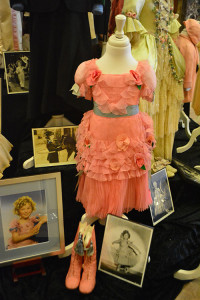 Shirley Temple Dress and Shoes From The Little Colonel, $20,000 Estimate

Out of all the doll stories I’ve covered over the years, I think that Theriault’s Shirley Temple auction has generated the most widespread positive coverage. Media coverage of course followed the exhibit as it traveled around the country to locations including the Strong Museum in Rochester, the Wenham Museum in Massachusetts and the Santa Monica History Museum in California.

However, in the last few days coverage has really snowballed, and has included articles in the Daily Mail (A piece of Hollywood history: Child actress Shirley Temple’s most prized possessions, including toys, film costumes and a $30,000 baby grand piano, to go up for auction) and the Guardian (Shirley Temple’s Belongings Set For Auction in Kansas City) in the United Kingdom, as well as articles in well-known United States publications including Vanity Fair and the Hollywood Reporter. And, of course, local Kansas City media is covering the auction, including the Kansas City Star: Shirley Temple’s Memorabilia Auction May Rack Up High Dollars in KC.

In any event, I’m enjoying the coverage quite a bit more than the usual mainstream media doll coverage, which too often is along the lines of Why Does The Media Insist On Calling Porcelain Dolls Creepy?